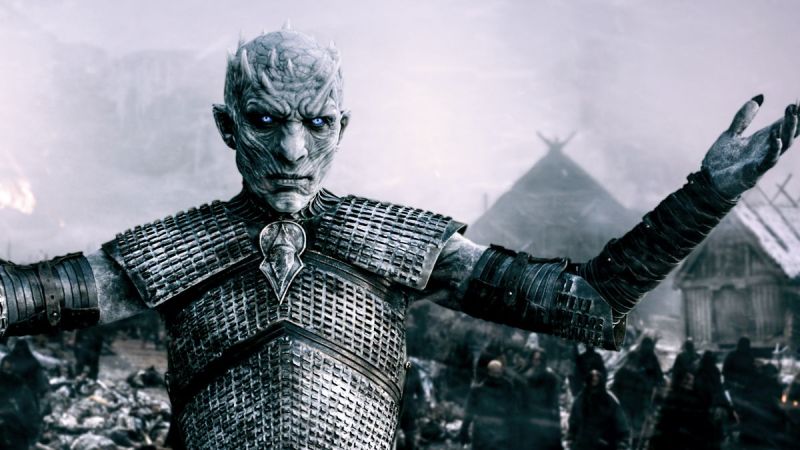 Night King is all like, “Come at me, bro.” Image source: HBO Viewer’s Guide

Woah, week 8 – slow down! That was some pretty fancy stuff you pulled!

I’m totally on board with those who said this was one of the most exciting episodes of this season. Some great non-book surprises this week to get you pumped up for the end of the season.

I’m loving the Tyrion-Daenerys dynamic. Right off the bat he has a compelling reason to be kept alive – no one else has the depth of knowledge he has of Westeros and its great families, coupled with the passion to tear them all down. I also enjoyed his diplomacy with Jorah, his extraction of the details and careful logic. He had to tread carefully, knowing the wrong answer would ruin both of them, but has grown fond of the man (haven’t we all?). It’s not like Dany could show up in King’s Landing with a known traitor at her side – the Lannisters could use that info in a  campaign against her (though I think having him at her side could also be spun in her favor – like she’s so awesome she can turn enemies into best friends?).

Poor Jorah, though. It hurts me that they hurt each other! I just want him and Dany to hug it out once. His dying wish is to be forgiven by his queen, and it seems as though he will go at lengths to make that happen before the grayscale claims him.

I wonder if Margaery and Loras are suffering the same beatings and torment that Cersei is, with daily demands for confession? I would assume so, since the Faith has vowed that all will be treated equal, but it’s nice to think that only Cersei is suffering for being such a… well, insufferable jerk (I sadistically enjoyed watching her suck water off the floor). Based on book scenes, I feel as though I know what will happen to her, but there have been a few clues this season that lead me to believe the show will head in a different direction. I’m thinking there’s a possibility for a trial by combat (Qyburn being the largest clue), but hoping this won’t be the case. Thoughts, anyone?

Elsewhere in great happenings – Arya is given her first “mission” and book readers get a glimpse of Cat of the Canals, called Lanna here (did you catch the nod to the readers with the cat in front of her cart?). It’s interesting – they’ve skipped a couple parts of her apprenticeship and gone right to assassination. I think there’s still room for the House of Black and White to introduce more of her training, but perhaps they will save that for next season.

I also enjoy that Reek confessed that Bran and Rickon are alive to Sansa! Girl needs some good news for once. I’m not sure what she’ll do with that information, but I take it to mean that there is still a part of Theon in there somewhere that’s desperate for redemption, and she can continue to dig that part out and get him to help her.

It looks as though Stannis won’t be able to help her anytime soon, given their lack of experience with winter and being snowed in many miles away. A raiding party lead by Ramsay certainly won’t help things, but we can hope he’ll be murdered in the fray, right? I’m still thinking we will see some action at Winterfell before the season gives out, but might not get Bolton vs. Baratheon vs. Brienne all at once as I had thought.

(Psst… anyone else notice Ramsay called the oncoming battle a “feast for crows”?)

Right off the bat, when the “Previously on…” mentioned Valyrian steel, I knew Jon was going to stab a White Walker – but holy hell, I had no clue they were going that big with it! Normally I’d complain that an adventure of that length is show filler (Jon didn’t leave the Wall in the books), but that battle scene was incredible. That closing scene with the Night King raising the dead was chilling (and slightly amusing watching Wun Wun walk to the boats, haha).

The battle really put some context around just how dire the stakes are in the North – up to this point, I felt as though the war between humans and the walkers seemed a little too abstract to feel as calamitous as they were making it sound (perhaps it was too many long-winded speeches). Now we’ve seen just how powerful the army of the dead is and how desperate the North is for some fire!

Valyrian steel, for those who do not recall, is extremely rare spell-forged steel created with dragonfire by master blacksmiths who largely do not exist in the world anymore. It’s renowned for its lightness and ability to stay sharp without much maintenance – and it is the only weapon able to kill White Walkers outside of dragonglass (though why it makes them EXPLODE is beyond me). Notable Valyrian steel weapons we have seen in the show: Ice (previously owned by Ned, but sadly melted down into Oathkeeper for Jamie/Brienne and Widow’s Wail for Joffrey), Longclaw (currently owned by Jon Snow), and the dagger used to stab Bran in season one. There are others, such as Heartsbane owned by House Tarly (Sam’s family), but we haven’t heard of those in the show and presumably we might be being lead to believe even fewer exist in this world, further increasing the stakes.

P.S. Let’s save up that speech Sam gave to Olly for later, yes?

So… What’s the pivotal episode 9 going to contain? It seems like they put their big budget eggs in the episode 8 basket, but we’ve got fighting pits, trials by the Faith, Braavosi assassinations, and raids in the North gearing up for us. Oh, and Dorne, but is anyone really looking forward to seeing more of that this season?