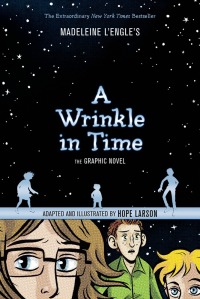 Popular Works:
A Wrinkle in Time, A Wind in The Door, A Swiftly Tilting Planet, An Acceptable Time, Troubling a Star

though she began writing at the wee age of five. She’s most notable for her Kairos and Chronos series, which feature the Murry and O’Keefe families respectively, but has published more than 60 books.

Fun Fact:
A Wrinkle In Time was rejected more than 30 times before it was finally published! If that’s not a testament to keep trying, I don’t know what is.

Now a children’s literature staple, A Wrinkle In Time also has a fantastic graphic novel adaptation, illustrated by Hope Larson (another woman crush) in 2012. A new softcover trade paperback was released on March 31 with new supplemental material! Eee!

And in case that isn’t exciting enough, the novel is also in the progress of being adapted into a film, with the screenplay being written by Frozen’s Jennifer Lee. Coming soon – maybe. It’s been in production since 2010.