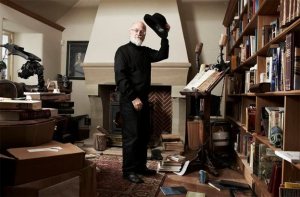 We lost one of the greats today.

Sir Terry Pratchett, aged 66, creator of Discworld and countless characters and fantasies, passed away at home, with his family and cat by his side.

What do you say about a hero? Selfishly, I am entirely heartbroken at his passing. I always wanted to meet the man behind some of my favorite books, and that chance has passed. His wit and wisdom was such a gift – hysterical, dry humor, wry as only a British sensibility can conjure, poking fun at politics, humanity and life’s most existential questions without ever being cruel. Truly, he was a good man who loved humans, loved being human, and loved writing about humans.

My first experience with Pratchett came as a recommendation from my brother, a fellow lover of comic books, sci-fi and Monty Python. Of course a Monty Python fanatic would love Terry. Often absurd, usually cheeky, always a delight. Sharp, but gentle wisdom about life and death. His books introduced familiar tropes – vampires, werewolves, and wizards – but with a whole new world and dimensions to explore, wildly unique characters to devour. And he was so freaking funny!

“If you trust in yourself. . .and believe in your dreams. . .and follow your star. . . you’ll still get beaten by people who spent their time working hard and learning things and weren’t so lazy.”

His characters are among the best I’ve ever known, creatures, gods and people with such outrageous complexities, appearing in cameos in one novel while starring in the next (the continuity between Discworld novels is one of my favorite aspects of it). From Sir Samuel Vimes, stern commander of the City Watch, who never fails to rush home to read “Where’s My Cow?” to Young Sam, to Cheery Littlebottom, with her welded-on high heels, ever eager to dispel rumors that just because she’s a bearded dwarf doesn’t mean she can’t be feminine. The Librarian of the Unseen University, orangutan and master of traveling through L-Space (the incredible inter-dimensional plane between libraries where all books, written and unwritten exist). Tiffany Aching, one of the most sensible, smart heroines young adult literature has to offer (not to mention her cohorts, the Nac Mac Feegle, who are curiously superstitious of lawyers and believe they’re already dead. “Crivens!”).

And of course Death. Oddly enough, Death might be my favorite character in all of Pratchett’s books. Though the hooded and scythed figure may be fairly traditional, the all-caps speaking, often comforting and wry character is anything but. As Terry wrote frequently about death (and Death), his own works may provide the best comfort to those who mourn his passing.

His final tweets, posted by his daughter, best illustrate the beloved author’s relationship with Death, and offer a fond farewell to Terry:

AT LAST, SIR TERRY, WE MUST WALK TOGETHER.

Terry took Death’s arm and followed him through the doors and on to the black desert under the endless night.