(If you haven’t read the first two books in the series, Unspoken and Untold, be warned of spoilers ahead, but no spoilers for the third book!)

After the maddening cliffhanger ending of Untold (in which Jared Lynburn is buried alive in a wall by his evil sorcerer uncle, Rob), Unmade starts out dark and stays dark, with consistent bits of snarky banter and commentary to lighten things up. Kami and her terrified but stalwart band of amateur rebels are trying to figure out just how to stop evil Uncle Rob from completing a winter sacrifice and enslaving the town of Sorry-in-the-Vale as his own power source. And, to be clear, this is a human sacrifice that they fear, and most of the town is willing to assist Rob because they are too scared to present any type of opposition. Families are divided, characters die, eagerly awaited make-out scenes are interrupted by nosy cousin/brothers. Things are bleak!

Fortunately, Sarah Rees Brennan is an excellent writer who can handle all these dark doings without getting too schmaltzy or melodramatic, and she balances the paranormal craziness with well placed humor and excellent characterization. Every character comes across as a real person with genuine, believable thoughts and motivations. They are complex, they are layered, they make sense.

Until the beautifully written dramatic conclusion of the book, there isn’t much new overarching plot development from what has already been seen in the previous volumes – evil Uncle Rob performs evil sorcery, Kami and friends resist, convoluted rituals are carried out every so often. What keeps this third book from feeling boring or repetitive are the characters and their complex relationships with one another – there are plenty of wonderful swoons and romantic pairings, but the changing dynamics between entire family units during such an awful experience are particularly well done.

No matter your age, start this series right now if you are a fan of paranormal fiction with emotional depth and maturity, because Sarah Rees Brennan writes wonderful characters and relationship dynamics that surpass a mere “young adult” label. The supernatural sorcerous mayhem is just an additional attraction.

This book applies to two of my literary bingo squares! 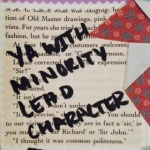 YA with Minority Lead Character:

Kami is part Japanese, and I love that the glimpses we get of her insecurities about looking different from the majority of her small town peers don’t make up some big clunky thing, but are just details of her character that make her seem all the more real.

“Of course I look different from all the other girls,” she said at last. “Anyone can see that. Half the town has suggested I date Raj Singh. Who’s thirteen.”

Because being part Japanese was the same thing as being Indian, and meant they didn’t belong with anyone else.

It was something Kami noticed, that she couldn’t help but notice: that she looked different from girls in pictures, girls on magazine covers, different from Angela and Holly and her own mother, who were all thin and pale and beautiful in what sometimes seemed to be the only right way. She noticed but tried not to mind, and didn’t mostly—just because she noticed didn’t mean she wanted to be someone else…

YA with LGBT Character:

Throughout the series, Kami discovers her friend Angela has feelings for another friend who is a girl. Again, in the hands of Sarah Rees Brennan, this aspect of the story works to present a lovely portrayal of a true to life character. This excerpt is from book two, but I love the exchange between Kami and Angela during an awkward sleep over after Kami realizes Angela has a crush on their friend Holly:

“The thing is,” Kami said, “you used to mention guys. I mean, you used to say things like you’d only date college guys. Wait, is it guys too? Because that’s fine. I mean, anything’s fine. I just want to know. I want us to be able to talk about it.”

Angela opened her eyes and looked up at Kami, her gaze dark and clear. “No,” she answered, quietly. “No, it isn’t guys. Not ever.”

Angela’s eyes narrowed, not sleepy now but almost angry. “Is it? Why is that good?”

“Why wouldn’t it be good? I love you,” said Kami. “And this is who you are. It would be a shame if you were any different.”