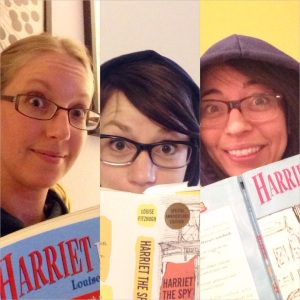 Your authors donned their Harriet blue hoodies and glasses and, uh, got a little silly. Next we’ll be practicing our onions.

Happy birthday, Harriet! The classic children’s novel Harriet The Spy turned 50 this year, and we thought that presented a fantastic opportunity to relive her spy routes and misadventures.

We use the word “relive” here in a half-truth, as we’ve discovered our own Erin Cloud has not read this childhood gem! Thus, she gets the wonderful opportunity to read this great piece of fiction for the first time, while Jessi and Caitlin relive the magic of the first time through her. (And reread it for themselves).

What do you remember about Harriet The Spy?

Caitlin: I thought Harriet was the coolest. She was kind of a weirdo and a bit of a loner, and when I was that age, that was what I felt like. I remember she described this blue hoodie she wore when she was spying, and I, too, had a blue hoodie! I could be that girl, and write in secret journals and make observations about the world around me! It was OK to be a loner!

When I think back on it now, I think I was more like Harriet than I want to admit, because she brought some of the bad things that happened on herself. I was like that too, Harriet.

Can we talk about how I love the name Harriet?

Jessi: Harriet was a new type of hero for the younger me. I remember feeling weird about rooting for a girl who was kind of a meanie. While she was brutal in her observations, she was also very clever. I so, so longed to be clever. (Spoiler alert ahead, Erin!) And, oh, was I happy the antagonist, good old what’s-her-face, lost her followers in the end. Huzzah!

Because of Harriet, I started The Super-Secret Spy Club. The S.S.S.C. was basically just one other girl and me spying on her older brother and his strange friend. Allow me now to give a shout out to my dad for purchasing for me truly killer stationary. “He and his strange friend are eating Cheetos in the kitchen. Why are they always eating Cheetos???” looks much cleverer on thick vellum.

Erin: Buffy’s fake little sister plays her in the movie? This is, legitimately, my only impression/remembrance of the book/movie.

What struck you most about the book on your reread?

Jessi: Before the reread, what I remembered was that Harriet was a spy. (The title lends itself to that kind of thinking, really.) I totally missed the good stuff! I found myself re-reading in teacher mode. There are so many discussion questions and ways to lead kids to relate situations in the book to their lives. The absolute gems are the little moments, like Harriet’s parents first noticing her writing in her notebook. (She’s been doing it for years, Mr. and Mrs. Welsch. Get it together.) These bits make you empathize with Harriet. They make you stop and take a second to examine what you might feel if you were in Harriet’s old, blue sneakers.

Caitlin: It surprised me how insightful and mature Harriet The Spy is – I found I related to it on a grown up level more than I thought I would. A lot of Harriet’s struggles actually hit pretty close to home – feeling lonely, dealing with loss, feeling so angry you want to snip off a piece of someone’s hair… Harriet expresses her feelings in a very 11 year old way – seeing it expressed in such a simple way was kind of reassuring to me.

Oh, and pretty much anything Ole Golly said I resolve to take to heart. The woman was so wise and practical! My favorite Golly-isms were “Tears never bring anything back,” and “Remember, to write is to put love into the world.”

Erin: I was expecting a simple read about the everyday adventures of a precocious child, and I think I ultimately underestimated this book. My chest ached every time a hilarious scene suddenly turned into another reminder of just how confused and lonely Harriet feels (e.g., “that onion business” when Harriet observes her parents’ reaction to her notebook habit – “Am I hurt? I don’t feel hurt. I just feel funny all over.”)

Likewise, the portion of the book after Harriet’s friends find her meanie notebook is agonizing because it’s so honest. Harriet never expressed malicious intent while writing in her notebook, and it’s heartbreaking to witness her genuine bafflement when her classmates first start laying on the revenge. I love that Louise Fitzhugh doesn’t cut any corners in this section, and I was relieved that Ole Golly didn’t reappear for some grand save-the-day-with-a-hug miracle. Instead, her letter saves Harriet in just the right manner, and Harriet stays true to her character by carrying out Ole Golly’s advice in her own way, in her own time. The realism of this children’s book is impressive but it left me feeling a bit somber.

Caitlin: I actually enjoy that it’s a bit somber – I think for kids, it’s kind of a lesson that life can be hard, but you can find ways to turn it around.

Jessica: When choosing books for my students to read for Literature class, I try to vary the genres. Another one of my all-time favorite books is Dear Mr. Henshaw. I’ve had students and their grown-ups (aka parents/guardians) tell me they liked it, but that it was just so depressing. I like these somber stories about relatable kids.

Why do you think Harriet is still relevant 50 years later?

Caitlin: To Erin’s point above, I think one of the reasons why this book is such a great read for all ages is that it’s so real! As an 11 year old, it IS baffling to try and understand your parents’ feelings, or to discover that what you thought were honest observations are, in fact, mean. I think it paints a wonderful picture of learning how to care for others, while still being true to yourself and doing what you love.

I really, really loved how honest this book is – I can remember feeling baffled, and angry and alone – like the world is SO UNFAIR because something didn’t go my way as a kid. It’s a good lesson to learn that some things don’t always go your way. Ole Golly won’t always come back to save you.

Jessica: My mom and I have talked about the feelings we have after we’ve finished reading a book we love. What are the characters up to? Where are they now? I imagine Harriet is now a successful writer. She stays true to who she is and loves what she does. Her intelligence, strong voice, and honest opinion make future Harriet an award-winning author. She may sound harsh, but c’mon. We all kind of love when people have the guts to say what everyone else is thinking.

Erin: I recently discovered that Harriet The Spy was frequently banned when it was first published because Harriet’s character was too brash and unapologetic. Isn’t it funny (and by funny I mean awful and pathetic) how the logic behind book banning spectacularly misses the point? Today, we see objections to children’s literature like Rainbow Rowell’s Eleanor and Park or Laurie Halse Anderson’s Speak because they contain obscene language and sexual situations, but the banners are blinding themselves to the bigger picture – these so-called “bad” topics aren’t glorified in the books, but used to portray the honest and gut wrenching situations that kids and teens experience.

Harriet learns plenty of well-deserved lessons by the end of her book, but she also shows kids of any time or age that there is nothing inherently wrong with feeling things that aren’t rosy and perfect.